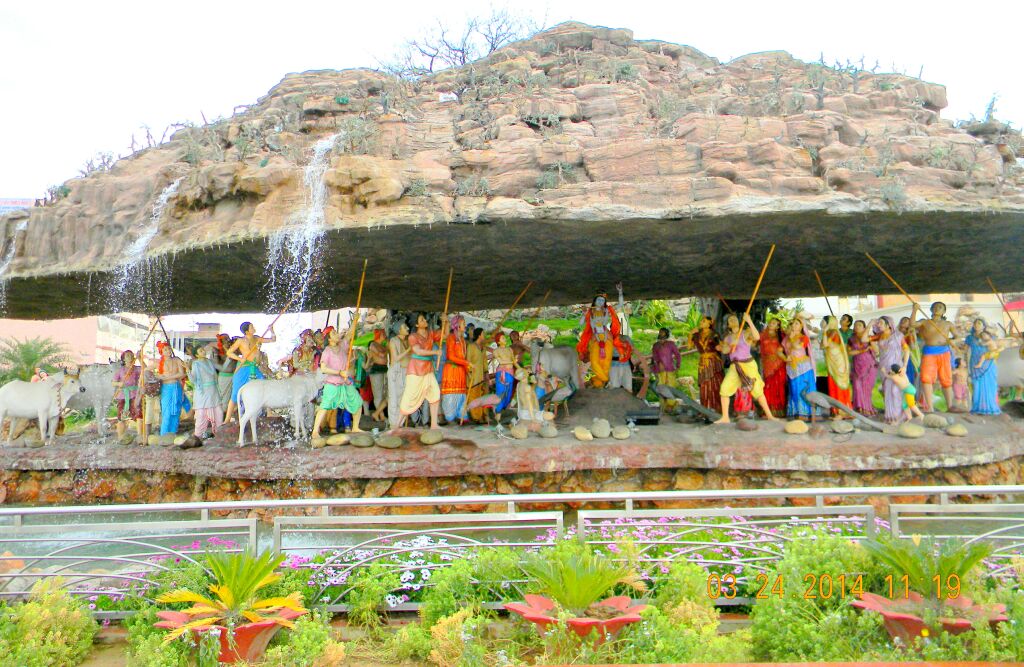 In Vrindavan, the rainy season had just gotten over and the Gopalas decided to thank Lord Indra, the lord of rain, by arranging for prayers. Learning about the occasion, young Krishna rushes to the Gopalas and says that Rain is a natural phenomena caused by Mount Goverdhana and not caused by divine interventions of lord Indra.  Krishna argued that sacrifice and god appeasement was not required and that Gopalas should focus on their Dharma; Agriculture and raising cattles. The Gopalas took Krishna’s advice and decided not to proceed with the prayers. Seeing the turn of events, Indra gets furious and brings an army of clouds to flood Vrindavan. Seeing the Crisis, Krishna goes to the centre of the village and announces to the Gopalas to not panic and follow him to safety. It starts raining heavily but people follow Krishna with complete faith and Krishna leads everyone to Mount Goverdhana. There Krishna using his divine powers lifts the whole mountain on his left hand little finger like an umbrella allowing everyone to take shelter. To calm the panicked Gopalas, Krishna starts to play a mesmerising tune on his Flute from his other hand.

The story goes on to show how Indra realises his mistake and takes back his army of clouds and asks for Krishna’s forgiveness but the point I want to make is the care and attention Krishna paid to not just physical wellbeing of his followers but also mental wellbeing. Krishna clearly realises that providing physical protection alone is not sufficient as a leader. Leaders carry greater responsibility of providing mental protection and a sense of security.

What do you see when you look at the walls in your office? Plain white paint? A few posters of founders? Or perhaps some notice boards and white boards? These represents wasted opportunity to boost productivity of your employees.

In an experiment conducted by two Dutch researchers, a bunch of students of a college were divided into two groups. Both groups were given a test in separate rooms. However one group was asked to talk about “what it would mean to be a professor” before taking the test while the other was asked to talk about “football hooliganism“. Could you guess which team average marks was higher? Well, the team that spoke about  “what it would mean to be a professor“! Wondering why two teams of similar intellect scored differently on the same test? its because the first team was PRIMED to be SMART, since it is this word that is associated with professors. Since the first group students were primed positive feeling they did better than they would otherwise have and the second group was negatively primed, the first scored 55.6 whereas the second scored 42.6 (Malcolm Gladwell’s book blink Pg 56)

Power poses are powerful. Amy Cuddy, a social psychologist at Harvard Business School, explains that when we are happy and confident, we express these power poses automatically and when we are unhappy and scared we tumble on our own body language. If we could train ourselves to express power pose when we start to feel sad and down, we could actually reverse our feelings! Simply put, when we are sad we cry and when we are elated we dance. So when you begin to feel sad, if you could make yourself put music on and start dancing, you would soon start feeling better. Initial few minutes of dance could feel phony since its out of sync with the feelings but soon our action dominates our brain chemicals called feelings. Watch this video:

So what could be done to office walls based on these two points that are well researched and proven?

Simple, Load the wall with POSITIVE WORDS AND POWER POSES!

Suddenly the employees would start exhibiting similar characteristics! And the HR team may have to continually put new ones to ensure people read, or use gamification techniques to get employees to pay attention to new wall items but all this WILL result in positive employees delivering better value to company.

Remember, any wall left white is a bunch of employees left wanting to be motivated. 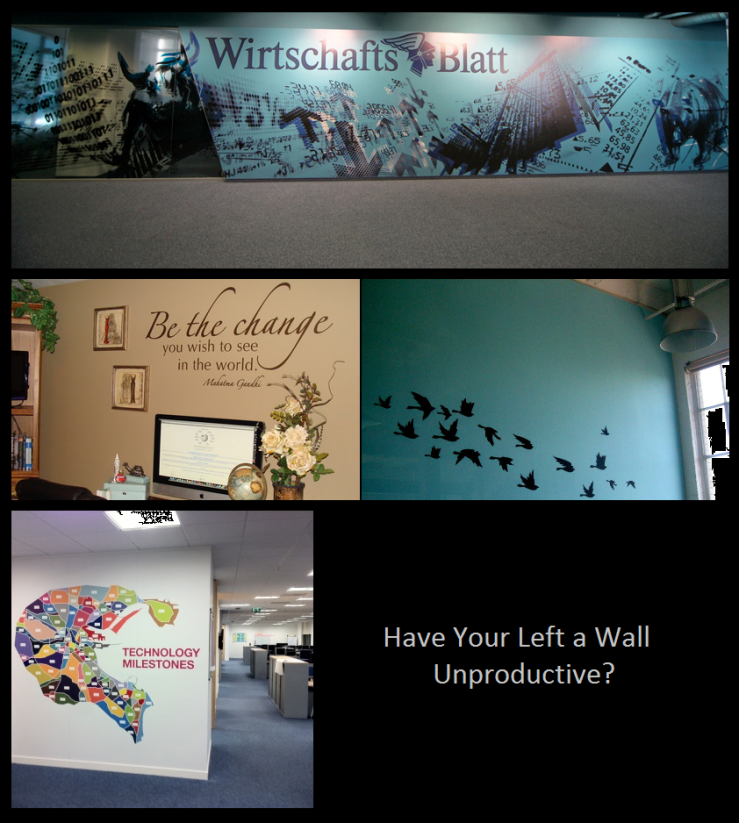 There are many articles and quotes that elaborates difference between a manager and a leader. The most concise and accurate in my view are presented by Dwight Eisenhower and Peter F. Drucker.

Fusing both these ideas and finding something core to human could bring out who a leader is and who a manager is. concisely put, leader is he, who aligns intentions of his team to achieve a purpose.

Managers essentially helps aligned teams achieve desired result by providing input required by the team. However if the team has different intentions then the manager would either fail or become a situational leader, thus aligning intention of the team.

Having zeroed in on the core fundamental activity of a leader, the next question is how could one align intention of a bunch a people, creating teams out of them? Well these simple practices could help:

For People to Trust You, Reveal Your Intentions: http://blogs.hbr.org/hill-lineback/2012/04/for-people-to-trust-you-reveal.html

I was reading the top posts in HBR and here is the list:

I observed that most of these articles were about being more successful in life. These articles are most commented and perhaps by highly skilled and intelligent people since those are the kind of people who flock to the HBR site! Most of them seem to concur with the posts and therefore crowd sourcing from there, I think I have found the secret of success! Yes! i indeed have!

Wish to know the secret of success? here you go…the secret to success is to BE HUMAN!

Human as a species has been phenomenally successful and to continue in the path of success, we just need to continue BEING HUMAN!

So now what is being human? Its about using your senses completely!

And there is one more thing that makes us Human, our Brain! so add one more to the recipe, THOUGHT!

So this is the secret to success, learn about the world from your senses and use your mind to do the right thing! Its as simple as that!

In some odd ways, its similar to what Lord Ganesha demonstrates!